There are many environmental contaminants that modern humans are exposed to on a regular basis including air pollution, heavy metals, pesticides, plastics and industrial chemicals and fuels. They permeate our spaces inside, outside and on the job. In fact, every pregnant woman in the U.S. is exposed to at least 43 different chemicals. These exposures may result in adverse effects for both mother and child and should be avoided as much as possible. A well known contaminant is mercury, a naturally occurring element, and our exposure is usually from one of two common forms: methylmercury (meHg) and ethylmercury (etHg).

Methylmercury (meHg) contamination in our environment is largely from coal-fired power plants. It is hazardous even in small amounts and typically enters our diet through the consumption of fish, which accumulate it in varying amounts depending on the species. meHg is known to cross the placenta and to accumulate in the fetus at higher levels than in the mother. Toxic levels may result in permanent damage to the fetal brain resulting in impaired neurodevelopment and reduced cognitive performance. On the other hand, there are many benefits to eating fish. Fish are high in protein, low in saturated fat and are rich in many micronutrients including omega-3 fatty acids such as docosahexaenoic acid (DHA). DHA has been shown to have a role in early fetal brain development and may be protective against adverse problems in pregnancy such as preterm birth, fetal growth restriction, gestational diabetes and preeclampsia. Benefits continue for breastfed infants and for children who consume fish. To derive the highest benefits of seafood consumption while minimizing the risk of meHg exposure it is recommended that mothers eat a 4 ounce serving of approved seafood 2-3 times a week. Seafood options that are low in meHg include some fish (salmon, cod, tilapia, canned light tuna), crustaceans (shrimp, crab, lobster) and shellfish (clams, oysters, scallops). Please note that albacore (white) tuna has more meHg than the other variety of tuna so should be limited to no more than 6 ounces per week. See “Advice About Eating Fish” below for more information.

Our exposure to ethylmercury (etHg) is largely through vaccination; etHg is a metabolite of thimerosal, the most widely used vaccine preservative to prevent germ growth. Compared to meHg, etHg is metabolized and eliminated by the body at a much faster rate. It is impossible to reach toxic levels of etHg from thimerosal containing vaccinations, regardless of multiple or repetitive exposures. Many well designed studies have demonstrated that there is no evidence of harm from the low levels of thimerosal present in some vaccines. Likewise there is no evidence linking thimerosal exposure to autism, a neurodevelopmental disorder. While multidose vaccine vials of the influenza vaccine continue to contain thimerosal (individual dose vials do not), the World Health Organization (WHO) considers this to be safe in pregnancy and infancy.

In conclusion, reducing exposures to environmental contaminants is important for human health and especially for pregnant women, infants and small children. Given the benefits of dietary fish in pregnancy and in fetal development, it is recommended to regularly consume a small amount as part of a balanced diet. Staying within the limits established by U.S. government agencies will prevent reaching toxic levels of methylmercury (meHg). In contrast, exposure to ethylmercury (etHg) from thimerosal containing vaccines is safe in pregnancy, infants and small children as it cannot reach toxic levels in the amounts given. 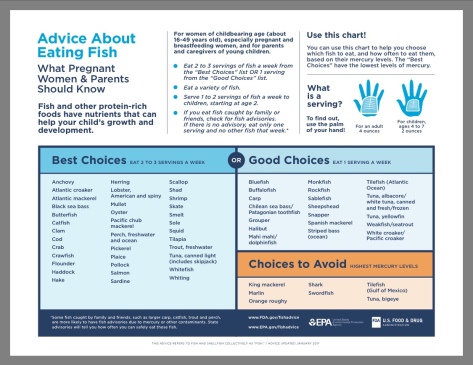 I am a board certified OB/GYN physician in Saranac Lake, NY. My practice includes traditional obstetrics and gynecology as well as medical and surgical services specific to the needs of minorities of gender, sex and sexual orientation. I strive to provide personalized, comprehensive and compassionate care to all of my patients.